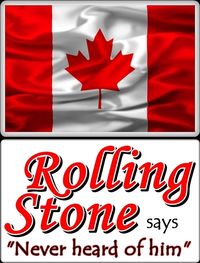 Considerable depth to his ever-expanding repertoire satisfies a WIDE VARIETY of musical tastes: Classic Oldies, Pop/Rock, 'Top-40', Rock & Roll, 'Pop' tunes, Rhythm & Blues, Country-Rock, soft rock, etc ...plus his own Original Music too! Chuck delivers MAXIMUM VALUE for your entertainment dollar. So, whatever the occasion: Chuck would love an opportunity to satisfy your musical needs!

Sorry about any possible confusion with another/different 'Chuck Brown': My friend; 'The GodFather of Go-Go' ...may his rockin' soul rest in peace.

ME: 'Chuck Brown: One-Man Band from Canada' & 'The GodFather of Go-Go: WindMeUpChuck' from Washington D.C. 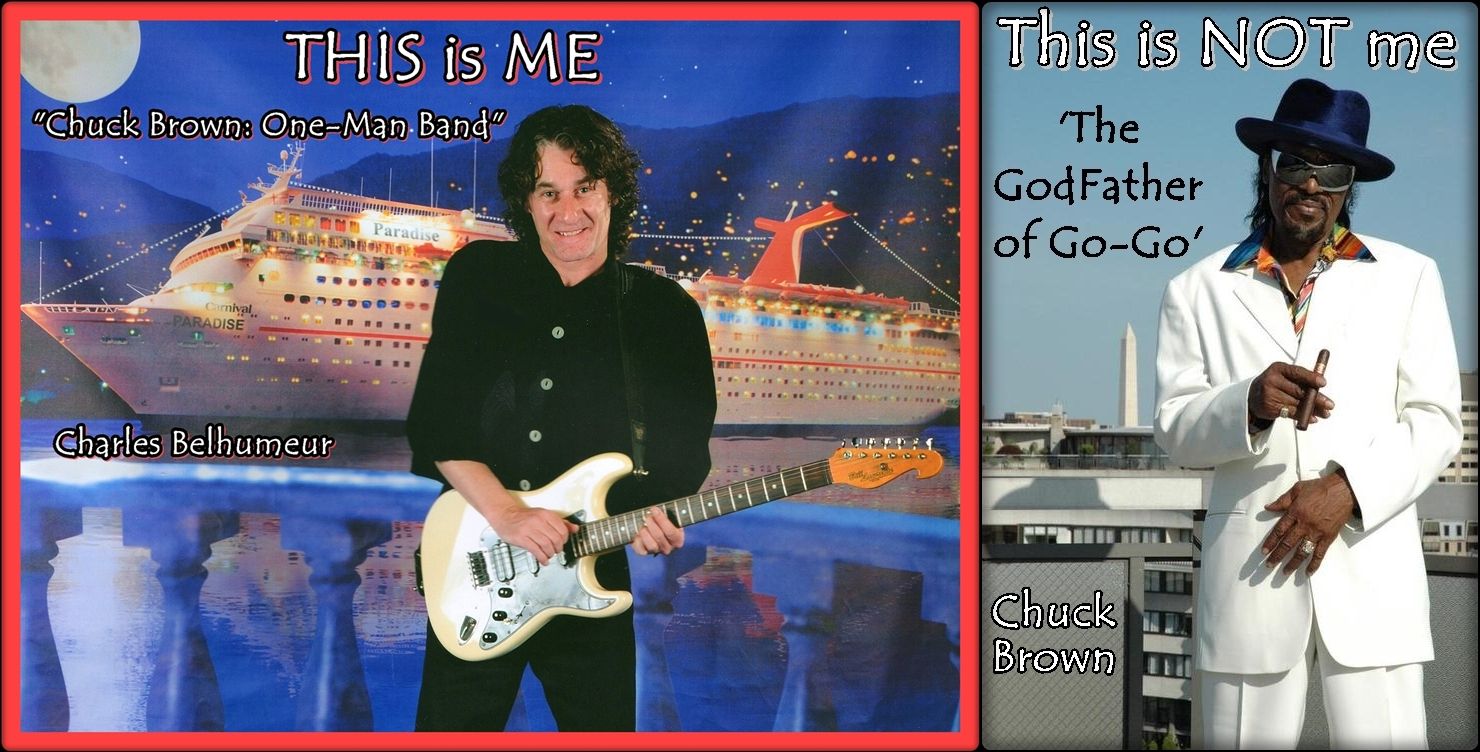 Many years ago now, Chuck & I exchanged Emails & a good laugh about how difficult it is to mistake us for one another. Most notably is the fact that he has a HUGE worldwide fan-base & countless albums to his name. Hailing from the Washington D.C. area, the other Chuck (the 'Main Man') had more than paid his dues to have enjoyed a long & very successful career as a well renowned and very well respected Musician. 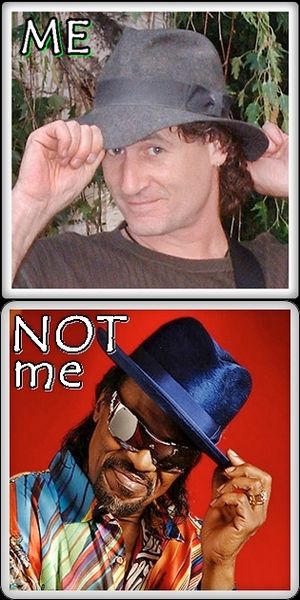 At the time when we exchanged emails, I let Chuck know that I would be posting photos of him on my website for everybody to see for themselves, some of the obvious differences between us. In the two photos above, notice that... hmmm: How shall I say this?... um, well... Chuck's suit is white, while mine is black. For all who might be easily offended: Please remember that BOTH Chuck & I EQUALLY found this issue quite comical, and laughed about it ourselves, between the two of us.

Chuck also had a great laugh at a story I shared with him about a group of HIS fans who boarded a Cruise-Ship I was performing on, and (before they had SEEN me) they became REALLY EXCITED when they READ that the ship's entertainment included "Chuck Brown"!!! 'WOW!' (they first thought ...as they later explained to me): What an absolute BONUS to simply take a vacation & accidentally wind-up (pun intended) on a ship with THE GREAT 'GodFather of Go-Go'!! Well... you can just imagine their utter disappointment to show-up for the evening's performance by 'Chuck Brown', only to see ME take the stage! WTF!?!?! So... the most vocal cat of the bunch (and a very LARGE cat -I might add) yelled across the room to me at the top of his lungs: "Aww Man!... YOU ain't no Chuck Brown!!!" 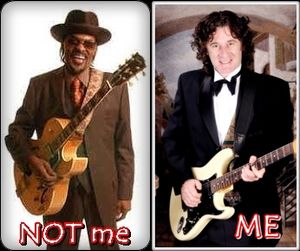 Luckily for me, that group was on a 5-day Cruise, which was sufficient time for them to recover from their initial disappointment, only to continue visiting me again every night after that until the end of their Cruise. By then, we were all havin' a laugh together about that case of mistaken identity, and 'raising a glass' in Chuck's honour. We ended-up all having such great fun together that it remains a very fond memory for me. At the end of their Cruise, I was satisfied to hear them tell me that since "THE MAN HIMSELF" wasn't on the ship, that I had at least served as an acceptable substitute in his absence. Let ME be the first (or second) to say: "Hey man: I ain't no Chuck Brown!" 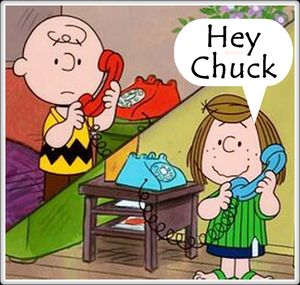 So... I'm perfectly content being the 'Chuck Brown' that you've probably never heard of. My real name is Charles Belhumeur, and my 'Stage-Name' ('Chuck Brown') was intended to be a reference to the 'Peanuts' comic strip written by Charles Schulz': More specifically about the 'Nickname' which 'Peppermint Patty' always used for 'Charlie Brown': "CHUCK" is what she always called him.

Since I was a child, many people have called me either 'Chuck' and/or 'Charlie'. Couple that with the fact that for many years, the vast majority of Booking-Agents, Managers, Promoters & various others who employed me as an Entertainer, had problems either just remembering and/or spelling my real last name. So, there came a point when I thought I was being clever by making things easier FOR THEM & using a simplified 'Stage-Name'. As it turned out, that certainly back-fired & the joke has been on me ever since, for being foolish enough to have chosen the same name as the legendary 'Godfather of Go-Go'.

Initially (after first starting to use my new alias), I was still performing mostly within Canada, so it wasn't causing too many issues back then, but as time went on & I started releasing my own music & performing Internationally, the issue was 'too far gone' by the time I created my own website. I've really come to regret ever starting to use 'Chuck Brown' as my 'Stage-Name' in the first place. Silly me! The 'upside' is that it lead me to eventually cross paths with the 'Main Man' himself; 'Wind Me Up Chuck!'.

If you google-search 'Chuck Brown', you'll only find the other 'Chuck' ('Wind Me up / The GodFather of Go-Go'). The only way you'll find ME and/or my Music online is by either searching specifically for "Charles Belhumeur", "Chuck Brown: One-Man Band" or specifiying my exact URL: https://chuckbrown.ca

In fact, that issue is also the same reason why I chose to RE-release an Album of mine using my real name instead. That Album was originally called 'Rough Stuff' by 'Chuck Brown', but was RE-named 'Just Jammin' by 'Charles Belhumeur', simply because my Music was getting lost within the other Chuck's HUGE discography. That same 'RE-release' of 'Rough Stuff' (called 'Just Jammin') is available from many online Music Distributors, and is now also available here in my MUSIC DEPT, but titled 'ORIGINALS from CANADA'. Here on my OFFICIAL WEBSITE, you'll see many references to myself as "C.B." because it's an easy substitute for either/both my real name and/or my previous 'stage-name'.

Since the re-release of 'Rough Stuff', I've used (and will continue to use) my real name for my musical releases. Online Music Distributors incorrectly posting my music together with the other Chuck's music is exactly what lead Chuck & I to cross paths with each other in the first place. Once again; Chuck & I had to laugh about some skinny white-boy's music just mysteriously appearing within his own Catalogue. If the online Distributors had invested enough time to simply look at our photos, then they would have clearly seen that 'one of these things is NOT like the other' ...hee hee hee...

Now, the fact that you're reading this makes me very pleased that you've somehow found your way onto my website. WELCOME!!! ...& THANK YOU for checking it out! Please take your time to enjoy a really good 'snoop' around, bookmark it, return often, and share it with whoever you wish. CHEERS!

The very sad passing of my friend ‘Wind-Me-Up Chuck’ Brown did indeed shake me up, and acted as a stark reminder about the value of time, and the importance of spending it with the ones you love. It took me almost exactly a year after Chuck's passing to fulfill my remaining contractual obligations performing onboard Cruise-Ships until May of 2013 before I could finally settle down with my Sweetheart & best buddy Claire in Bournemouth, England. 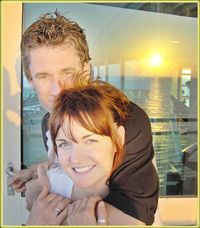 Claire & I had spent many years working towards being together ever since we first met working onboard Royal Caribbean's 'SPLENDOUR of the Seas' Cruise-Ship, where Claire Managed the Ship's Fitness Centre. We now know from experience all about the challenges two people from different Countries face when wanting to start a life together, and ours is a beautiful story which is worthy of a book in and of itself, however... now back to the story at hand...

Chuck's passing instilled a sense of urgency upon my life, and reminded me that there was absolutely no more time to waste with the important matter of being with Claire. PEACE is what her & I both longed for, and managed to achieve by finally being together in a place to call 'OUR HOME'. 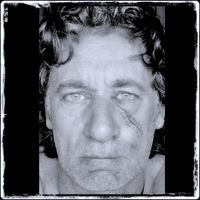 I've seen A LOT of beaches all over the world in my time, but the seven (7) mile stretch of luscious soft sand of Bournemouth Beach is second to none! It ranks right up there with the very best of them, and I (we) are VERY FORTUNATE to live in such a beautiful part of the world. I'm also VERY GRATEFUL that it's not always as scorching-hot as other places, because my bout with skin-cancer in 2015 was a good indication that I've already spent more than my fair share of time in the sunshine.

As I slowly edge closer to retirement, your generosity for buying my Music & Merchandise, Donating any 'Tips' and/or contributing towards my 'Crowdfunding Campaign' is so GREATLY APPRECIATED! It turns out that this website is only becoming MORE IMPORTANT to me over time, for supplementing my income into retirement. Such are the hazards of choosing to be self-employed for so many years, which is especially why any/all income generated by your kindness is truly invaluable to me now, and into the foreseeable future. THANK YOU!!! 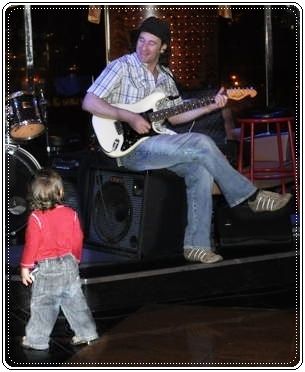 This curious lil guy kept edging closer to the stage. 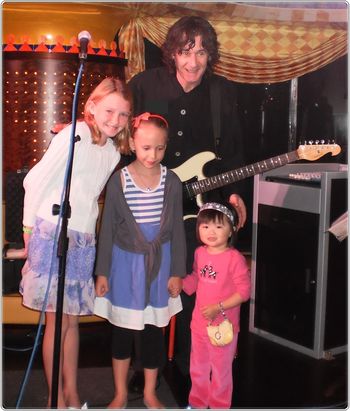 A group of tiny little fans. 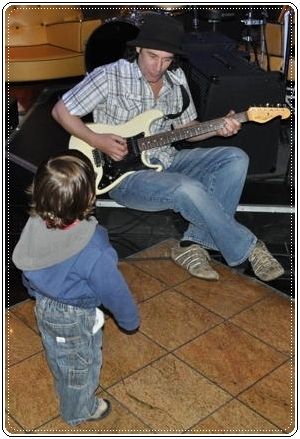 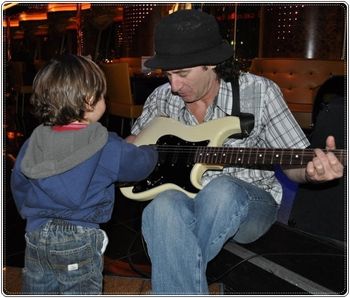 ...& was brave enough to strum my guitar! 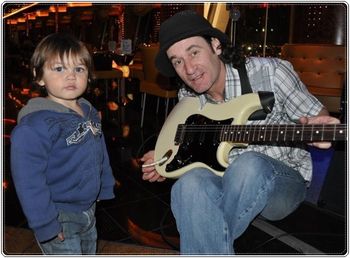 I love performing for children! They're always happy just to listen without making any requests, and are very rarely drunk.

The curious little guy in these photos kept edging closer to the stage until he was brave enough to come & strum my guitar: A real treat for ME! It was the little guy's Mom & Dad who gave me these photos with their approval for me to post them here.

'click' on the buttons below to learn about Chuck's happy Customers...

A summary of Chuck's previous Clients
Reviews about Chuck's performance